1955-2020
The 65th anniversary of the Hungarian-Indonesian Diplomatic Relations

Hungary established diplomatic relations with the Republic of Indonesia in 1955, and two years later, in 1957 Hungary opened its embassy in Jakarta. The Indonesian embassy started its operation in Budapest in 1962. Since then, the two countries have a prospering relationship and successful cooperation in cultural and educational exchange programs, and a close economic partnership. In 2020, the two countries celebrate the 65th anniversary of the establishment of bilateral diplomatic ties. Besides the past, we also celebrate the future prospects that can lead the two countries to an even more firm and precious relationship.

The establishment of diplomatic ties between Hungary and Indonesia

The Hungarian embassy started its operation in Jakarta

Sukarno, the first President of Indonesia visited Hungary in 1960. To his honour, the city of Budapest was covered with Indonesian flags and hundreds of thousands people stood along the road when he arrived. ﻿President Sukarno was waving all the way from an open car. During his visit, he stopped by at the Parliament and Heroes’ Square, watched a dance performance in the Opera House, and visited an orphanage as well. Before leaving the country, he also visited the Budapest Industrial Trade Show. 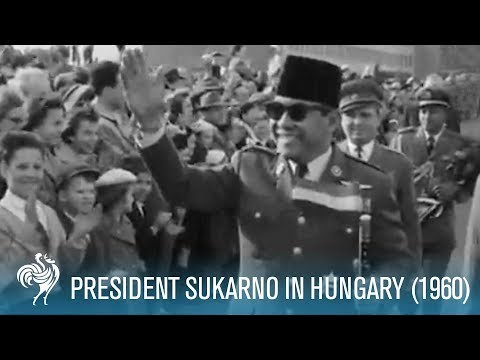 The Indonesian embassy started its operation in Budapest

After the 1965 turmoil in Indonesia the diplomatic ties started to develop gradually and became more intensive in the 80s with the state visit of the Chairman of the Presidential Council of Hungary, Pál Losonczi to Indonesia in 1984. At the invitation of his Hungarian counterpart, Indonesian President Suharto also visited Hungary in the next year.

Since 1993, the Darmasiswa scholarship, offered by the Government of Indonesia, has been open for Hungarian students interested in studying Indonesian language and culture. The number of Hungarian alumni of the Darmasiswa Program has reached more than 350 students during the last 27 years.

The developing bilateral relations between the two governments were reflected through the increasing number of high-ranking official visits in the late 80s and early 90s. The visit of President Árpád Göncz to Indonesia in 1994 elevated the relations to the highest level between the Republic of Hungary and Indonesia. A short story collection by Árpád Göncz was translated and published under the title Pulang.

President Sukarno at the official reception in the Hungarian Parliament

The state visit of the Chairman of the Presidential Council of Hungary, Pál Losonczi to Indonesia

Re-establisment of the Joint Economic Committee

To foster the economic, trade relations, and speed up economic cooperation, in 2004, the Joint Economic Committee at ministerial level was re-established.

In 2005, the two governments signed the Agreement between the Government of the Republic of Indonesia and the Government of the Republic of Hungary on Economic Cooperation, which reinstated the previous economic arrangements. Indonesian Minister of Foreign Affairs, Dr. Hassan Wirayuda, visited Budapest and co-chaired the First Session of the Joint Commission of Indonesia – Hungary. During the visit, the Indonesian Minister also signed the Memorandum of Understanding of the Establishment of Bilateral Consultation Forum between Indonesian and Hungarian Foreign Ministries.

The official visit of Prime Minister Ferenc Gyurcsány to Indonesia

Prime Minister Ferenc Gyurcsány paid an official visit to Indonesia in 2005, where he had an official meeting with President Susilo Bambang Yudhoyono. The Prime Minister also visited the House of Representatives of the Republic of Indonesia and attended a business forum. During the visit the countries signed agreements of cooperation in economic and touristic topics.

The opening ceremony of the children′s clinic in Meuraxa Hospital

Hungary constructed a children′s clinic in Meuraxa Hospital, Banda Aceh after the devastating earthquake in Aceh and North Sumatra in December 2004. The handover ceremony of the Hungarian and Austrian Red Cross-funded Meuraxa Hospital in Banda Aceh took place in November 2007 with the participation of a delegation of the Hungarian Red Cross led by President György Habsburg.

Official visit of the Speaker of the Parliament of Hungary

The parliamentary dimension of the bilateral relations also developed dynamically and Ms. Katalin Szili, the Speaker of the Parliament of Hungary paid an official visit to Indonesia in 2007.

Official visit of the President of the Republic of Hungary, bilateral cooperation develop further.

President László Sólyom paid an official visit to Indonesia in May 2008. The presidential visit focused on environmental protection and the effects of climate change. The President visited the Tangkuban Perahu volcano and presented a lecture about the questions of climate change at the University of Indonesia. Later that year, the Second Session of the Joint Commission on Economic Cooperation was held in Bali.

As the two countries strengthened their bilateral cooperation, strong ties also developed at the local level in the forms of sister city/province cooperation. During 2008-2010, the Budapest–Jakarta and the Gödöllő– Bogor sister city cooperation, as well the sister province cooperation between the province of North Sumatra and Békés County were signed. In 2008, Fauzi Bowo, Governor of Jakarta visited Budapest. This visit was reciprocated by Mayor Gábor Demszky in 2009, and a twinning agreement was signed between the two capitals.

In November 2008, György Gémesi, the mayor of Gödöllő, visited the town of Bogor near Jakarta, with which the sister city cooperation agreement was signed in 2009. The ceremony of the handing over of the World Peace Gong donated from Indonesia to Hungary by the Indonesian World Peace Committee took place in 2008 in the main square of Gödöllő

The visit of President László Sólyom to Indonesia

The World Peace Gong donated from Indonesia to Hungary

In 2010, the Nyíregyháza-Sóstó Zoo of Hungary inaugurated the Indonesia House – Green Pyramid in the framework of cooperation with Ragunan Zoo of Jakarta during which the two institutions started a wildlife exchange program including the display of Komodo dragons.

Official visits of the Speaker of the Parliament of Hungary

In June 2011, Foreign Minister Marty Natalegawa attended the 10th ASEM Foreign Ministers' Summit (FMM) in Gödöllő. In 2011, Mr. László Kövér, Speaker of the Parliament met with his Indonesian counterpart and with the Indonesian President Susilo Bambang Yudhoyono. Mr Kövér handed over a donation to the victims of the Merapi volcanic eruption near Yogyakarta.

In April 2012, Foreign Minister János Martonyi paid an official visit to Indonesia. During the visit, the two foreign ministers signed an agreement on bilateral partial visa waiver for holders of diplomatic and service passports.

President Susilo Bambang Yudhoyono paid a state visit to Hungary in 2013 on the invitation of President János Áder, during which he also had a bilateral meeting with Prime Minister Viktor Orbán. The Intergovernmental Cooperation Agreement on Water and the Framework Agreement on Aid Loans was signed in December 2013. As a result, Hungary and Indonesia have later on installed water treatment plants at 36 project sites throughout Indonesia, providing clean water for half a million people. By the end of 2019, the project was successfully completed.

Prime Minister Viktor Orbán paid an official visit to Indonesia in 2016 during which he held talks with President Joko Widodo as well as Sultan X. Hamengku Buwono, Governor of the Special Region of Yogyakarta. Since 2016, within the framework of the Stipendium Hungaricum program, Hungary is providing 50 Indonesian students with the opportunity to continue their higher education studies in Hungary. Starting from the 2020-21 academic year, Hungary has doubled the number of scholarships provided for Indonesian students in the program to 100 pax per academic year.

The Embassy of Hungary in Jakarta in cooperation with the Ministry of Communication and Informatics and Telkom Indonesia organized the 1st HUNINDOTECH Business Forum in order to promote Hungarian ICT companies and innovations.

Stipendium Hungaricum Scholarship awardees, who are just ready to depart to Hungary, with Ambassador Judit Pach

In September Minister Retno Marsudi met Péter Szijjártó, Minister of Foreign Affairs and Trade of Hugnary, discussing the increase of investment and trade volume and acknowledging the outstanding bilateral cooperation in digital economy and water procurement. In October, Minister Basuki Hadimuljono represented Indonesia at the Budapest Water Summit, conducted high-level meetings and met Prime Minister Viktor Orbán to discuss ongoing and future projects in Indonesia, in which Hungarian companies play a crucial role. With the steady growth of economic cooperation, the 5th meeting of the Joint Commission on Economic Cooperation between Hungary and Indonesia was also held in Budapest in December.

Prime Minister Viktor Orbán paid a working visit to Indonesia in January 2020 and met President Joko Widodo. During the visit, Minister of Foreign Affairs and Trade Péter Szijjártó also met with his Indonesian counterpart, Retno Marsudi in Jakarta, along with other Indonesian line ministers with whom Minister Szijjártó discussed further strengthening economic cooperation.

István Jakab, Deputy Speaker of the National Assembly paid an official visit to Indonesia in February 2020. Regarding sports diplomacy, the Hungarian Puskás Academy is ready to receive two talented young football players from Indonesia in the near future as part of a sports scholarship. 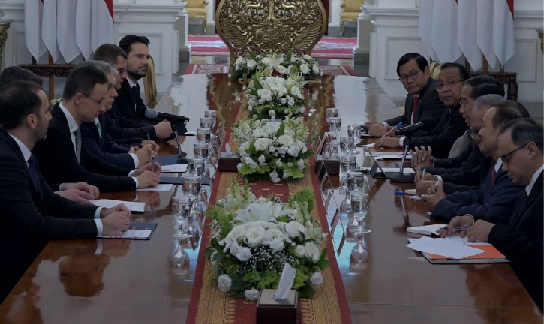 Work visit of Viktor Orbán and Péter Szijjártó to Jakarta